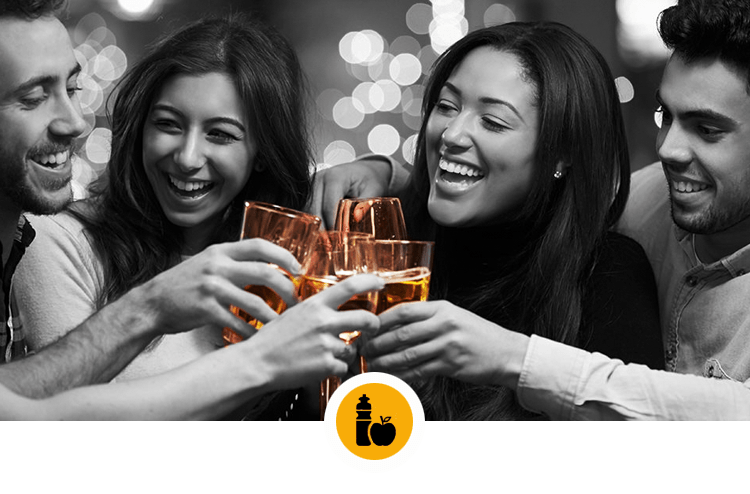 Social drinking is HUGE at the club.

And it’s only getting bigger and bigger in the social event arena.

The question is: How do you manage your social drinking at events?

Well, that’s exactly what you’re going to learn in this article.

Social drinking is commonly referred to as “responsible drinking,” which is the casual drinking of alcoholic beverages in a social setting without an intent to become intoxicated. In Western cultures, good news is often celebrated by a group of people having a few alcoholic drinks.

Having said that, whether you are a lead or a follow, social drinking but to be more specific, drinking may be a problem for you at clubs and events.

This article is only my opinion, coming from the lead point of view, but I believe it should be applied equally to both leads AND follows.

Being at the dance club is fun. Social gatherings are fun. These places are fun not only for the dancing, but for partying with friends. Right? Right!

At these events, some people tend to drink, and to drink a lot.

Some of the people that take social drinking seriously think that it will make them a better dancer. It doesn’t. Maybe one or two drinks make you less inhibited and a little more ‘creative’. Four or five drinks do not.

If you pay attention, you could probably see the signs of someone being intoxicated. By detecting the signs before dancing with someone, it may help you prevent possible injuries.

So, what are some of the possible signs?

Example #1. She doesn’t ask me to dance, she just grabs my hand and pulls me to the dance floor.

Example #3. She pulls you through the crowd, without noticing if you are bumping into people.

Should dancers avoid the bar or social drinking?

A lot of my female friends ask me if I like to have a glass of wine with dinner or a beer at the bar with my friends after a long day of dancing. Honestly, I don’t.

I was first introduced to beer and wine here in the United States.

The real question is: Should you avoid social drinking all together?

• A phytonutrient called resveratrol, a chemical compound found in red wine, has been shown to reduce stress and has been speculated to contribute to longevity when consumed in moderation.

Keep in mind, though, that grapes also have resveratrol and won’t get you tipsy…

• Moderate drinking (no more than 1-2 drinks a day) can reduce the risk for cardiovascular disease, heart attack, and stroke. It may also increase levels of the good kind of cholesterol.

But here’s the bad news:

Having a few drinks after dancing may not be the best idea, since acute alcohol consumption in large amounts has been shown to affect muscle function and recovery post-exercise.

However, another smaller study didn’t find the same level of impairment in low dose alcohol consumption in athletes, so there seems to be a dose-dependent effect.

Meaning that the more you drink, the more it will affect your muscles, both their recovery and their ability to build strength.

Drinking also affects how your body bounces back after a challenging day of dancing. Research published in PLOS One last year found that when you have several drinks after exercising, the signals that would normally tell your muscles to grow stronger are suppressed.

And an earlier study from Massey University in New Zealand showed that excessive drinking delays recovery from muscles soreness. That means you’ll be negating the strength gains you could have been making in class and hurting from it for longer.

Time off due to injury doesn’t give you a free pass. In fact, it’s even more reason to avoid drinking. Alcohol can produce increased swelling of an injury because it causes the blood vessels to dilate.

The more swelling of an injured area, the longer it could take to heal.

So, any type of alcoholic beverage, including beer and wine, packs a big calorie punch.

When added to sweetened mixers, the calories increase even more. A typical margarita can have anywhere between 250-600 calories! Instead, have Sangria, which has about 150-300 calories, and then at least you are getting antioxidants from the red wine and fruit.

The higher the alcohol content of a beverage, the more calories it has.

Even if you do eat a healthy meal, alcohol makes it harder to reap the benefits. Alcohol can irritate our stomach lining, reducing our capacity to absorb nutrients from foods, many of which play a large role in energy metabolism.

While social drinking, your body prioritizes metabolizing alcohol over fat or carbs, and stores amino acids from protein as fat.

After having a few drinks, you’ll be more likely to feel sluggish in the studio or at work the next day. That’s because alcohol consumption may reduce sleep time and quality, explains Rachel Fine, a dietitian who founded To The Pointe Nutrition.

Although a nightcap might increase deep sleep in the first part of the night, once you metabolize the alcohol several hours later, your body switches to a lighter stage and is easily woken up.

Without adequate rest, your energy levels and mental clarity will be lower, hampering your ability to perform movement.

One study suggests this nutrient displacement causes overall energy stores to be as much as 50 percent lower than normal as soon as eight hours after drinking.

Since alcohol is a diuretic, it can cause dehydration, which can last into the next day. And by the time you start to feel thirsty, athletic performance can decrease by up to 10 to 20 percent, according to sports dietitian Dawn Weatherwax.

Keep yourself hydrated by having at least one glass of water for every alcoholic beverage you consume.

Alcohol can produce detectable impairments in memory after only a few drinks and, as the amount of alcohol increases, so does the degree of impairment.

Large quantities of alcohol, especially when consumed quickly and on an empty stomach, can produce a blackout, or an interval of time for which the intoxicated person cannot recall key details of events, or even entire events.

Blackouts are much more common among social drinkers than previously assumed and should be viewed as a potential consequence of acute intoxication regardless of age.

We all know how alcohol affects the brain and that it impairs our ability to operate anything complicated like a car or a Balanchine ballet. So please never drink and drive. This statement include social drinking  too!

It has also been shown to affect anxiety levels, sleep, blood pressure, and a host of other physiological conditions. We all know it can also be addictive.

• The Effect Of Alcohol On Men vs Women

Men and women metabolize alcohol differently. Women physiologically will feel the effects faster than men because they produce less of an enzyme that helps rid the body of alcohol. It also increases breast cancer risk.

Women are increasingly suffering from the ill effects of alcohol, too. National data show that the cirrhosis death rate shot up by 57% among women aged 45-64 from 2000-2015 in the US, compared to 21% among men.

Adult women’s visits to hospital emergency departments for overdosing on alcohol also are rising sharply. And risky drinking patterns are escalating among women in particular.

Just a drink then or not

After a long week of rehearsal or performances, sometimes all you want is to blow off steam with a few drinks with friends. You may even feel like you’ve earned a night out after all the hard work you’ve put in.

A glass of wine or a beer can be helpful in reducing stress levels. But the key is moderation.

If you’re really feeling the need, I suggest wine, especially red for the added heart-healthy benefits from antioxidants and resveratrol. While research remains limited, resveratrol might help to prevent damage to blood vessels by reducing LDL (or ‘bad’) cholesterol and preventing blood clots.

But if beer is more your thing, then beer is a good choice for you because it is relatively rich in B vitamins, and has silicon, which can help strengthen your bones by increasing bone-mineral density.

In general, if you stick to the recommended guidelines (no more than one drink—5 ounces of wine, 12 ounces of beer or 1.5 ounces of liquor—per day for women and two for men), the negative effects of drinking are unlikely to get in the way of your dance goals.

So, my advice to you is… alcohol is not a “no no” for dancing. If you choose to drink alcohol, it should always be consumed wisely to allow you to perform at your best.

If you are of legal age, and you do decide to drink, please do so responsibly and don’t drive.

I go dancing all the time and social drinking is not required for you to have an amazing experience. I believe there is a time and place for everything in life but drinking and dancing don’t always mix.

A lot of your actions should be based on a balancing act, and sometimes finding the right balance is challenging, but once you find it, it’s priceless.

PS. If you are curious about what to do to prime your body for dancing, click here 🙂

The Joy And Surprise Benefit Of Drinking Water

How To Stop Sweating To Boost Your Confidence

Stop Complaining And Find The Courage To Be Happy